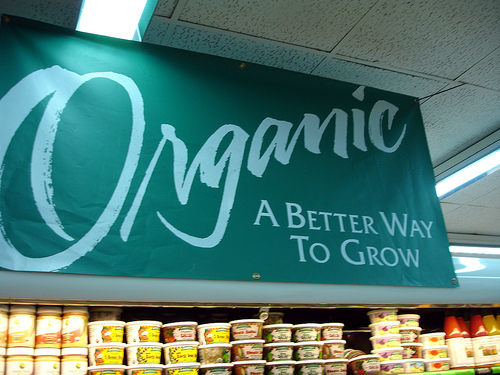 A recent study into organic food found that it appears to:

As you can imagine, the junk food industry’s un-organic response to this groundswell of healthy food choices is to highlight industry-funded research that suggests that eating organic food is no more than a lifestyle choice. Thankfully, an insightful four-year, $25 million European study found that:

• Animals fed an organic diet were slimmer (yes, skinnier!) than their un-organic fed counterparts because fat cells appear to trap and store the heavy pesticide residues found in un-organic produce

• Organics appear to promote weight loss by reducing your exposure to chemical pesticides which bind to fat and once absorbed may stay in the body for a lifetime (over 350 chemicals can accumulate in our body fat!).

• Organic fruit and vegetables contain up to 40 percent more antioxidants.

• Milk from organic herds contained up to 90 percent more antioxidants

• Organic food also had higher levels of beneficial minerals such as iron and zinc, critical minerals in the development of a child’s brain.

Additionally, according to the Institute for Responsible Technology, un-organic crops like corn and soy that have been genetically engineered to be more profitable now contain chemical toxins in their seeds, which may be why these crops are banned in Europe, Australia, Japan, Russia and almost 40 developed countries around the world! They may also contain hidden allergens that might be contributing to the allergy epidemic.

So What Does “Organic” Mean? And What About “All Natural”?

Because the U.S. lags behind other developed countries when it comes to food safety, understanding label claims can often be a challenge for even the savviest shopper!

The term “organic” refers to foods grown and processed without chemical toxins, artificial ingredients, chemical preservatives or ionizing radiation. The guidelines for organic foods were established on October 21, 2002 by the U.S. Department of Agriculture. To use these terms, producers must pay additional fees and follow strict guidelines and regulations:

• 100 percent Organic — All ingredients are organic.

• Organic — 95 percent or more of the total ingredients are organic.

• Made with Organic Ingredients — At least 70 percent of the ingredients are organic.

For the savviest of label readers, the following are the legal guidelines established by the U.S. Department of Agriculture for organics:

Must be grown without the use of:

• Fed only 100 percent organic feed, are not the offspring of cloned animals and have never been administered growth hormones or antibiotics. In addition, their meat must never be irradiated.

• Natural (or All Natural) meat or poultry products contain no artificial ingredients and are minimally processed. They are not necessarily organic.

• “No hormones administered” or “no antibiotics added” is sometimes seen on labels, but it can only appear if the producer can document the absence of hormone or antibiotic administration.

• Free-range or free-roaming poultry have access to the outdoors without a minimum time. They are not necessarily organic.

• Cage-free poultry means nothing as most chickens are kept indoors (but cage-free) if they are grown for meat.

Comes from animals that were fed 100 percent organic feed and were not given antibiotics, prophylactic drugs or genetically engineered and synthetically created growth hormones (such as rBGH) for at least the last year.

rBGH (recombinant bovine growth hormone) is a genetically engineered, synthetic chemical protein hormone vaccinated into cows to artificially boost their milk production. Like aspartame, rBGH has been banned in Europe because of the breast cancer risk that it may present.

• Produced by hens that are fed 100 percent organic feed and have never been given growth hormones or antibiotics.

• Cage-free eggs are produced by hens that are not confined in cages. The hens might not have access to the outdoors, though, and are not necessarily organic.

The USDA currently has no guidelines set for seafood; however, un-organic fish is often caged underwater and treated with pesticides to prevent the spread of disease.

Cereal and grain crops are regularly sprayed with pesticides that collect in the grain’s outer layers, raising concerns about chemical residues in un-organic bread, cakes and cookies.

The following terms are often found on packaged products and can be confusing to consumers:

* Natural is often a misnomer. There are no true guidelines for this term when used on a packaged product, although it is used frequently and often assumed to mean organic or healthier.

* Gourmet is another misleading term that leads consumers to believe that they are purchasing a product that is made finer ingredients, when in reality it has no established guidelines or regulations.

And when it comes to protecting the health of your family, “Always remember, you have within you the strength, the patience, and the passion to reach for the stars to change the world.” ~ Harriet Tubman